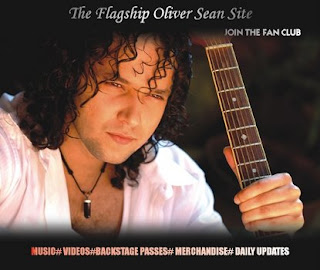 We love you all,
The Oliver Sean Band
Posted by Oliver Sean at Wednesday, April 25, 2007 No comments:

The New Oliver Sean Music Video 'Darna Chod Do Remix - Ecstacy Mix' for all of my blog viewers.

Labels: Darna Chod Do Remix, I Like It, new album, Oliver Sean Video

For those of you who dont get Zee Music on your satellite network here is the exclusive footage of the program "Oliver Sean Featured artiste on Zee Singles". You can watch it right here on the Oliver Sean Blog (Thanks to YouTube.com).

Oliver Sean’s new music video ‘Darna Remix’ has been released and the worldwide premiere was on MTV India as an Exclusive Video on friday, 13th of April 2007. This is a much anticipated video from Oliver Sean’s new Hindi Album ‘Darna Chod Do’. His fans have already made ‘Darna Remix’ a huge hit in Clubs across the country.

In more exciting news, the ‘Darna Remix’ video has been shot on International Film Standards which has given Oliver the chance to release this new video in the US & Europe on International Music Channels like Trace TV and MTV Europe etc. “The sound of this song is very new and fresh especially for a Hindi Song and the song has already hit clubs in the US and the UK so we at W.O.A Records & Crescendo Music are very excited about the International release of this video and the album” says Oliver Sean who is also the Managing Director of W.O.A Records.

Oliver’s last Video was the title track from his new album ‘Darna Chod Do’ which was released last month and is still hitting new highs on channels across the country. Zee TV Network featured Oliver Sean as their Featured Artiste on Zee Music’s new program ‘Singles’. Also coming up is the one on one interview with Oliver Sean on MTV’s Super Select which will also be aired this month.

The Darna Remix Video will be featured for 3 days as an Exclusive Video on MTV following which all the other channels including Zee Music, ETC, Lemon, Channel V will start airing the video from Monday, 16th of April 2007.