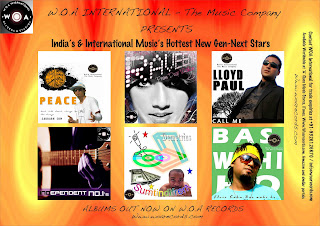 The Hot New Releases on W.O.A Records this Feb - some of the videos of these albums have already hit Vh1, SS, Trendz etc... The rest will be on air next week :-) Its a super time for all W.O.A Artists :-) All of you in Canada, Europe & the US - catch the WOA Videos on Much Music, MTV2 and MTV Europe :-) Rock n Roll! - W.O.A News Desk

Posted by Oliver Sean at Tuesday, February 16, 2010 No comments: 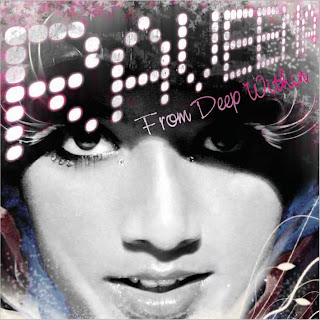 Goa, India - 10th Feb '10 - The new releases on W.O.A International are creating much noise in the music industry. These young artists are bursting out with a bang as their albums hit stores worldwide and their music videos supporting the albums have been signed on by Vh1, SS Music, MTV and various other top networks worldwide. Some of the artist's whose videos have already begun airplay on Vh1 and other networks are Saurabh Som the Indian/Canadian Rapper with his new album 'Peace' and his music video of the title track. And also creating a buzz Internationally is the Belgian born singer of Indian origin 'Raveena' who at 13 years of age is being called the hottest new artist on the scene with her debut music video 'Mr. DJ' being on 'Hit Factory' on Vh1. Her album is scheduled for release this February on W.O.A Records titled 'From Deep Within'. Other artist's whose music videos and albums are hitting all major networks and stores this month are Goan acts Elvis Kahn with his album and video 'Bas Wahi Ho' a Hindi Rock album and last but not least coming out with a bang is Lounge/Fusion artist Lloyd Paul of the 'Heaven for Hell' fame who is to be out with his debut Pop album 'Call Me' and music video 'Maie'.

With these artists being supported all the way through by W.O.A International and the immense support by the media, their music videos and albums are already being touted as hot sellers by record stores. Reports of their music video being a hot favorite on music channels have already started rolling in during this short span of time since the release of the videos.

"Before the launch of the album and videos we were put on tour by W.O.A International on the W.O.A Records India Tour 2009 which gave us exposure on an International level when we performed alongside top International W.O.A Artists" says W.O.A Artist Saurabh Som. "We do not know of any other label that can do this for new artists and back us in such a grand scale" chime in W.O.A Artist's Lloyd Paul and Elvis Kahn.

Some of these artists are scheduled for tours across various regions to promote their album and videos and their tour schedules will be posted up on the W.O.A Blog and Official W.O.A Records website. Stay tuned for new and latest updates right here.

Posted by Oliver Sean at Wednesday, February 10, 2010 No comments: