We are looking for employees working remotely.

My name is Christian, I am the personnel manager of a large International company.
Most of the work you can do from home, that is, at a distance.
Salary is $2900-$5200.

If you are interested in this offer, please visit Our Site

Posted by Oliver Sean at Thursday, February 09, 2017 No comments:

Posted by Oliver Sean at Thursday, February 09, 2017 No comments: 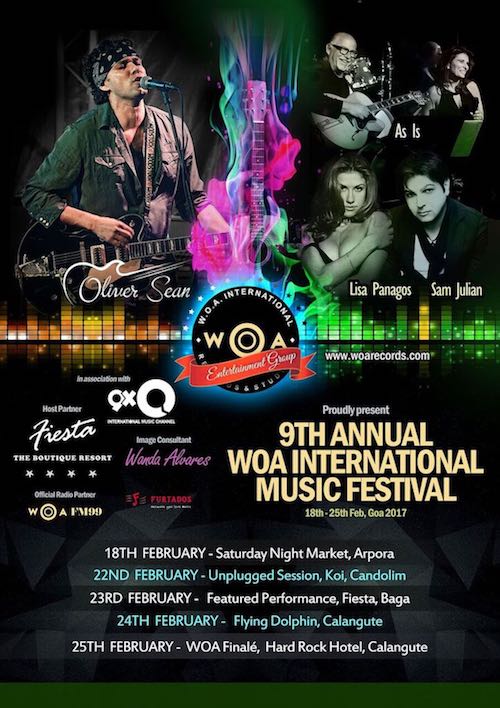 This is the event that brings together Independent Music's breakthrough artists from around the world to perform live in concert across Goa, India. Few can come close to the scale of the Annual W.O.A International Music Festival, featuring multi genre international bands performing across the best live music venues in the region, organised every year by WOA Entertainment, supported by partners like 9XO, the International Music Channel of India (Media Partners). Fiesta Beach Resort, the best boutique resort in Goa (Official Host Partner) and WOAFM99, the Internationally Distributed Radio show (Official Radio Partner), all coming together to promote breakthrough Independent Artists in a major nationally promoted and publicised Live Music Tour.

"Nine years of consistent music festivals, featuring the World's Best International independent artists and it still feels like only yesterday when we had our first WOA Music Festival and Tour" says Wanda Alvares, Marketing Director, W.O.A Entertainment Group, "We have been able to achieve something so fantastic because of our associaton with the wonderful festival partners through the years, the Elite WOA Artist Roster, the WOA Entertainment Team who work so hard to make this festival a success every year and most importantly the fans!"

In addition to the tour, W.O.A Records the label arm of the WOA Entertainment Group, will also be officially doing a media exclusive launch of WOA Records compilations, Independent No.1's Vol.7 and Goa Chillout Zone, Vol.8, featuring the world's best independent artists and chill out musicians from around the world, compiled and produced by Platinum Selling Artist and Producer Oliver Sean. Both the compilations will be released to the public in March after the tour ends.

Now in its 9th year, the W.O.A International Music Festival and India Tour is an annual event that fans of Independent music look forward to. Make sure you don't miss out on this world-class music tour, 18th - 25th February, 2017 www.woarecordsindiatour.com | www.woaentertainment.co.uk | www.independentnumberones.com | www.goachilloutzone.com

Posted by Oliver Sean at Wednesday, February 08, 2017 No comments: