The weeks top 6 Certified Indie songs are out! On today's WOAFM99 Radio Show our Host, Artist/Producer Oliver Sean (Billboard Top 10, iTunes No.1, MTV EMA Nominee & Grammy Voting Member) introduces the 6 Breakthrough Independent artists that have made it into our #certifiedindie songs of the week.

2. Sylvie Hillsberg - Dance the Night Away

Today we bring you 6 certified #RealIndie songs of the week, chosen by the WOAFM99 Radio Team and our host Oliver Sean (Billboard Top 10, iTunes No.1  & MTV EMA Nominated Artist/Producer). We hope these tracks will entertain you during this tragic time.  Our prayers are withy everyone! We hope to bring some joy into your lives every week with the music we curate from the amazing  Real Independent musicians around the world.

1. Parasona - Revel in the Night

On today's episode of the WOAFM99 Radio Show, our celebrity host Oliver Sean introduces 6 of this week's breakthrough #RealIndie Artists/Songs, selected by the WOA Entertainment Group. From Pop to Louisiana Swamp Blues and Acid Jazz to Country Rock - we have it all right here! 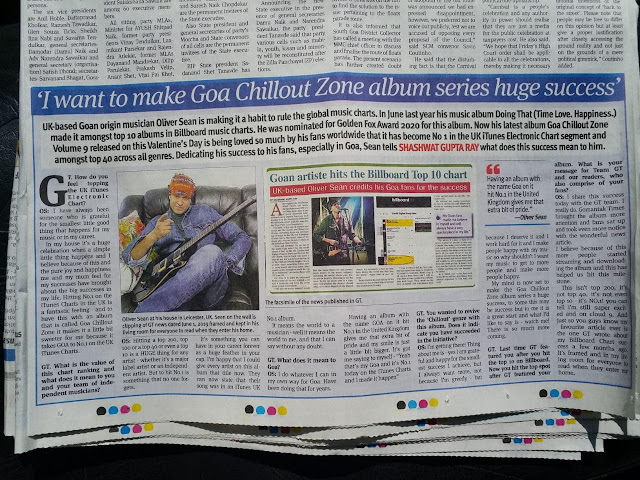 Posted by Oliver Sean at Saturday, February 29, 2020 No comments:

Feb 27th, 2020 by WOAFM99
Welcome back to the brand new WOAFM99 Radio Show for 2020. Today is the premiere of Season 17 and have we got a treat for all the #RealFans of #RealIndie Music - we are excited to introduce 3 new artists who have never been played on the WOAFM99 Radio Show before and we predict these guys are going to make it BIG (you can quote us on that). Also joining our celebrity host Oliver Sean over the phone, are 3 of WOA Entertainment's Indie Stars from Australia, USA & England with quick messages for the fans. These WOA Artists have hit No.1 in the UK, from the Chart Topping Album Goa Chillout Zone Vol.9 - the album recently hit No.1 on the iTunes UK Electronic Charts and surprised everyone by hitting the Top 40 of the Official UK Album Charts - how cool is that :-)
The Breakthrough Artists:
1. Adam Highbarger - Illinois Asphalt
2. Mass - Terra Nous
3. Catherine Duc & Ben Hobbs - Blind To You (Stargazing Remix)
4. Barz Noble - Fantasy
5. Mick J Clark - There's Nothing Anybody Can Do
6. Silent Stranger - A Girl Like You

#WOAFM99
Artists who would like to submit their music for consideration for the WOAFM99 Radio Show can submit their music via www.woafm99.com or via the WOA Music Opportunities Page
The WOAFM99 Radio Show is produced by WOA Films and Oliver Sean Productions for the WOA Entertainment Group
www.woaentertainment.com
www.woafm99.com
www.oliversean.com
#WOAFORMUSICIANS (Music Opportunities)
Posted by Oliver Sean at Friday, February 28, 2020 No comments:

The Goa Chillout Zone Vol.9 Compilation produced and conceptualised by Billboard Top 10 Artist & Producer Oliver Sean has hit No.1 on the album charts on iiTunes UK in the Electronic Music Genre

The Goa Chillout Zone Vol.9 produced by Oliver Sean and released on Valentines day has hit No.1 in the UK on the iTunes Album Charts in the Electronic Music Genre. The album received very positive media attention including a cover story by the Gomantak Times Weekender Newspaper, which led to added attention for this one of a kind Indie Chillout Music Album Compilation. The fans of WOA Entertainment's  Artists have shown what true fan support can do for Independent Musicians and has propelled the album to No.1 in the United Kingdom, no small feat for an Indie Album featuring Independent Musicians from around the world.The Goa Chillout Zone is an album series produced and compiled by Billboard Top 10 Artist Oliver Sean. This is the 9th Edition of the album and features several Billboard Top 10 Artists from the WOA Records Roster who are featured on this album.

"I am stunned as I always am every time the fans propel our albums or singles to the charts" says Oliver Sean, MTV EMA Nominated Artist & Producer, "Even though by now I should expect amazing things because of our fans, it still surprise me how the fans are showing the music industry that the manufactured crap does not fly with them anymore - 2020 is the Year of the Indie"WOA Entertainment have constantly stated that 2020 is the year of the Real Indie, the phrase they use for Real Independent Music and Musicians that they represent and support. It now looks like it truly is The Year of the Indie that they have been saying since the start of the year.Fans can download or stream the Goa Chillout Zone album on iTunes, Apple Music and other streaming and download sites. Oliver Sean and the rest of the artists are urging their fans to keep downloading and streaming the Goa Chillout Zone Album Vol.9 on the Apple Platforms to help keep the album on the charts.Download the album at https://music.apple.com/gb/album/goa-chillout-zone-vol-9/...Find out more about the Goa Chillout Zone at www.goachilloutzone.com and learn more about the album's producer Oliver Sean at www.oliversean.com
Posted by Oliver Sean at Thursday, February 20, 2020 No comments: 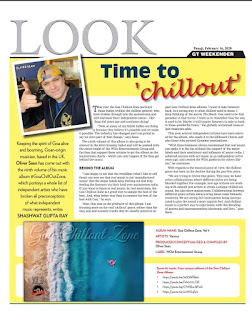 
WOA Entertainment release the much awaited Goa Chillout Zone 9 featuring their Billboard Top 10 Acts
The Goa Chillout Zone Vol.9 has been released worldwide today to celebrate Valentines Day. It features some of the best music that WOA have to offer, including Billboard chart topping artists. This edition marks 9 years of this compilation series.
Every year WOA Entertainment release several high profile compilation albums featuring the best indie music and artists that the label has to offer. These albums often hit major national and international charts. Several of the WOA Entertainment artists go on to hit various mainstream charts and get major label signings for their music, thanks in part to the support from commercial radio, venues and retail that work closely with the WOA Team.
The Goa Chillout Zone album was the very first compilation to have been released by WOA Records over 10 years ago. This 9th edition of the Goa Chillout Zone compilation album has been released worldwide to coincide with Valentines day, celebrating the love for Goa & Chillout Music. The music reflects the spirit of chill and represents the image of what Goa means to the varied list of musicians that have come together to celebrate their own form of Chillout Music.
"I conceptualised this album back in 2008 when I decided that we should bring together artists from around the world, inspired by Goa for their music" says Oliver Sean, Billboard Top 10 Artist & Producer, "little did I know that the album would take off in such a big way that WOA would release a new edition almost every year".
The album features several Billboard Top 10 artists and iTunes No.1 tracks from the WOA roster, including new and breakthrough chillout music artists, coming together from around the world, including Goa, Portugal, UK, US, Germany, Scandinavia, Canada, France, Italy and various other countries, making this a star studded International Chill Album. All the music on the album has one thing in common - Goa Chillout!
Starting on Valentine's Day, the Goa Chillout Zone Vol.9 is available for free streaming & available to download across Spotify, iTunes, Apple Music, Amazon, Google music and other music sites. The album is officially supported by the WOAFM99 Radio Show where fans can learn more about the artists with exclusive interviews www.woafm99.com

Find our more at http://www.goachilloutzone.com
Posted by Oliver Sean at Friday, February 14, 2020 No comments:

It has been really difficult to create Gmail accounts now a day, for solving this problem

We are selling PVA accounts since 2015 We have sold more than 50k Email accounts till now.

We have 100% working Phone verified accounts which you can buy and can use for email marketing, Social media and other sign up works.

You can Gmail PVA in bulk and can get discount.

Posted by Oliver Sean at Thursday, January 23, 2020 No comments:

Use Cashkaro Referral Code 515406 and Signup here on Cashkaro

https://cashkaro.com/r=515406 and earn life time rewards, cashback and referral earnings. It is 100% money saving and earning website. Shop on all your favorite website today and earn.

It is really helping people in saving their money and time. Start referring your friends today and earn money with cashkaro now.

There is no limit to earning cashback , you can withdraw your earnings in bank or as a amazon or flipkart voucher.

Cashkaro is offering 5 INR per referral and lifetime 10% cashback on your referrals shopping which you can withdraw in your bank or Amazon Gift voucher.

You can earn unlimited money with this cashback website. It is India's No.1 cashback website . You can get refer and earn and can withdraw your earnings in your bank account at same day.

Do not forget to use Cashkaro referral Code 515406

Posted by Oliver Sean at Saturday, January 18, 2020 No comments: