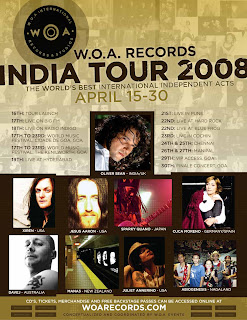 For further info log in at http://www.woarecords.com
Posted by Oliver Sean at Tuesday, April 08, 2008 No comments:

Goa, India – April 7, 2008 – There have been large tours before, but few can come close to the scale and ambition of the W.O.A International India Tour 2008. Bringing together 10 international artists from the 15th to the 30th of April 2008 to various cities across India, this is the start of the independent music revolution in this part of the world.

“It’s one of the most ambitious tours we’ve organized,” says Wanda Alvares, Executive Vice President and Marketing Director “From co-ordinating the schedule and the travelling and hotel requirements to actually getting the venues to support all these great acts, it’s a lot of work. But it’s worth it.” The media interest in the event, not to mention the artists appearing on the tour, are testament to this hard work.

The artists include respected worldwide acts like world music star Oliver Sean, American star Xiren, Japanese Rocker Sparky Quano and Six other bands and artists from Australia, New Zealand, Spain & US, playing everything from electronica to rock, there’s something for everyone’s taste.

The media certainly agrees, with support from Major Networks, Publications and Radio. This support will see the artists conduct a special 5-day press and media meet and video shoot during the tour, allowing both sides to share in this special event.

W.O.A International will also be producing a compilation CD comprising of every artist on the tour and a Rockumentary. The Rockumentary is expected to garner immense support and interest as it will show International artists from various countries touring India together and performing at world class events – a true Independent music revolution in India caught on tape.

With an even bigger, better and most of all louder tour planned for 2009, the W.O.A International Tour of India is just the first in a planned annual event. Make sure you catch it while you can.


ABOUT W.O.A INTERNATIONAL
Formed in 1998 by World Music star Oliver Sean, W.O.A International is a global entertainment company that continues to lead the way when it comes to how music should be promoted. They are pioneering international music in India and Asia and are now synonymous with the region. Their enviable reputation at opening up new possibilities means that they are the go-to company for independent artists wishing a truly international presence.

Further details about the India Tour 2008 is available at www.woarecords.com
Posted by Oliver Sean at Tuesday, April 08, 2008 No comments: