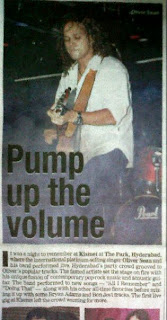 Oliver Sean Pumps it up in Hyderabad

Hyderabad, India - 31st August 2011 - It was a night to remember at Kismet
at The Park, Hyderabad, where the international platinum-selling singer
Oliver Sean and his band performed live. Hyderabad's party crowd grooved to
Oliver's popular tracks.

The famed artiste set the stage on fire with his unique fusion of
contemporary pop-rock music and acoustic guitar. The band performed to new
songs &lsqauo "All I Remember" and "Doing That" &lsqauo along with his other all-time
favorites before mixing it up with some Bryan Adams and Bon Jovi tracks. The
first live gig at Kismet left the crowd wanting for more.

Posted by Oliver Sean at Wednesday, August 31, 2011 No comments:

Hyderabad, India - 25th August, 2011 - Goa based singer Oliver Sean, whose new single So Good went platinum in two weeks and had 2.8 million hits (plays and downloads) in just three days, is going to be performing in the city (Hyderabad) this Saturday.

Interestingly, Oliver has Goan roots apart from his Portuguese and Italian lineage.
He started singing when he was just four years old, and started playing the guitar when he was eight and wrote his first song at 11.