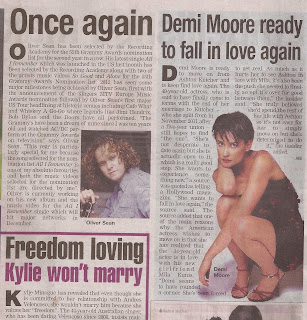 BY CARRIE-MARIE BRATLEY, IN GENERAL · 25-10-2012 10:35:00 · The PORTUGAL NEWS
Portuguese musician Oliver Sean has this week received news that his music has been selected by the Recording Academy for the 55th Grammy Awards Nomination List. Earlier this year he was also nominated for an MTV Europe Music Awards 2012 worldwide act award.

The Portugal News - 25th Oct 2012 - Oliver Sean’s latest single ‘All I Remember’, which was launched in the US last month during the singer’s first major US Tour, has been selected by the Recording Academy along with two of the artists music videos ‘So Good’ and ‘Alone’ for the 55th Grammy Awards Nomination list.
Born to a Portuguese mother and an Italian-American father Oliver Sean already has a huge fan following in Asia and is now gaining a growing legion of fans in the US and the UK.
He recently spent time in Lisbon, where he owns a home in Estoril, before jetting off to Dubai for a TV premiere last week.
This is the second year in the running that Oliver Sean’s music and music videos have been selected as exceptional recordings by the Recording Academy and placed in the Grammy Awards nomination list.
The year 2012 has seen some major milestones being achieved by Oliver Sean, first with the announcement of the singer’s MTV Europe Music Awards nomination followed by Oliver Sean’s first major US Tour headlining at historic venues including ‘Cafe Wha?’ and ‘Whiskey A Go-Go’, where legends like Jimi Hendrix, Bob Dylan and the Doors have all performed.
And now the announcement of the Grammy Awards nomination list second year in the running firmly establishes Oliver Sean as a force to reckon within the International music scene.
“The Grammy’s have been a dream of mine since I was ten years old and watched AC/DC perform at the Grammy Awards on television” says Oliver Sean, “this year is particularly special for me because the song selected for the nomination list ‘All I Remember’ is one of my absolute favorites and both the music videos selected for the nomination list are directed by me.”
Besides being an award winning and respected singer songwriter and music composer Oliver Sean is also a film maker.
Several of Oliver Sean’s productions of his own music videos and various International artists’ music videos currently play on international music channels like MTV and Vh1, all directed and produced by Sean.
His music video ‘So Good’ is now an MTV EMA Nominated music video and a Grammy Nomination finalist making this platinum selling single, which is also the title track of Oliver Sean’s last album his highest selling single till date.
The Grammy nomination final list is currently in the final voting stage where the 11,000 Grammy Award voting members vote and decide which recordings from the nomination list are selected as the top-5 in each category for the main Grammy Awards to be held in February 2013. The main top-5 nominations of each category will be announced in December once voting ends.
Oliver Sean is currently working on his new album and the music video for the ‘All I Remember’ single which will hit major networks in December. Also in the works is the much talked about Oliver Sean LIVE in the US DVD which is to be released in a few weeks and Oliver Sean fan club members will receive this DVD for free. Sean is also gearing up for his headlining performance at the Scorcher fest in Sydney Australia on 22nd December 2012.
For the latest information on Oliver Sean and to join the artists’ fan club please visit http://www.oliversean.com.

A Part of W.O.A International - The Music Co.!
http://www.woatv.tv
Posted by Oliver Sean at Thursday, October 25, 2012 No comments: 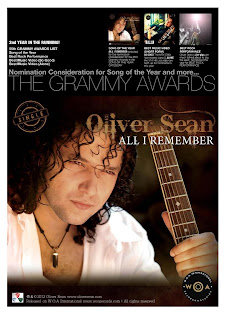 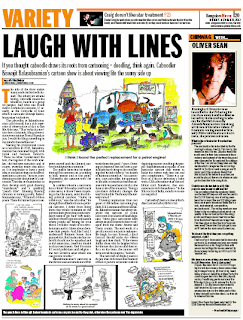 Oliver Sean Grammy Nomination List Inclusion Article by Prashanth Vidyasagar on Bangalore Mirror (Times of India) today. Read the full article online here http://epaper.timesofindia.com/Default/Scripting/ArticleWin.asp?From=Archive&Source=Page&Skin=MIRRORNEW&BaseHref=BGMIR%2F2012%2F10%2F22&PageLabel=20&EntityId=Ar02001&ViewMode=HTML
His singleAll I Remember was launched in the US during his tour last month and has been selected by the Recording Academy for the 55th Grammy Awards Nomination List along  with two of his other videos. A Grammy-voting member himself, Oliver tells us about the criteria, the process and more.
What is the criterion for the selection process? The nomination list is decided by the Recording Academy directly. This is why this means so much to me. Labels around the world send in their best releases to the academy and a panel of the recording academy chooses the 'Exceptional Recordings of the Year' in various categories and they decide which categories the recordings best fit in. So if you send a song as world music and if the academy likes it but thinks that it fits better in pop then you would be placed there or in whatever categories they think the song fits in.
Could you explain what exactly this process means and could lead to? The recordings that the academy thinks are the best of the year will now be sent to the 11,000 Grammy award voting members from around the world. Voting members are experts in various fields like 'vocals, instrumental, composition, production etc'. The voting members now listen to the recordings based purely on quality of the various parts of the song/ works and they vote on their favourites from the lists of the various categories. This then gives us the final top five nominees every December that you get to see on TV before the main award ceremony.
This is not the first time you are getting selected, right? That's correct; I was selected in nine categories for 15 nominations last year mainly because it was a full-length album with several recordings that were selected by the academy including my VH1 top 10 hit 'movies' etc.
We hear you are working on a music video for All I Remember. How is that going? Oh yes, the video for All I Remember is going to rock because we have some amazing footage from my US tour of my headlining shows at Cafe Wha in New York (the same stage where Jimi Hendrix played) and my headlining performance at the Whiskey A Go-go in LA (where the Doors played) :). So, we have some fantastic stuff from the US tour and I'm in preproduction now for the India part of the video that will be in the video. I can't wait to release this one.
International Artist & MTV Europe Music Awards Nominee Oliver Sean has been selected for the 55th Grammy Awards Nomination List.  http://www.oliversean.com
— Prashanth Vidyasagar

A sneak peek into the upcoming Oliver Sean LIVE IN THE USA DVD & W.O.A TV Specials on WOA Tv

Oliver Sean's new single 'All I Remember' selected as part of the 2012 exceptional recordings finalized for  the 55th Grammy Nomination List in Song of the Year, Best Rock Song and Best Rock Performance. Listen to the Oliver Sean hit here:

All I Remember - The New Single by Oliver Sean

Please vote for Oliver Sean for the MTV EMA today at http://in.mtvema.com/artists/oliver-sean

www.oliversean.com
Posted by Oliver Sean at Monday, October 08, 2012 No comments:

Take a look at Oliver Sean's video on YouTube nominated for Best Worldwide Act for the MTV EMA's 2012. Please vote at http://in.mtvema.com/artists/oliver-sean