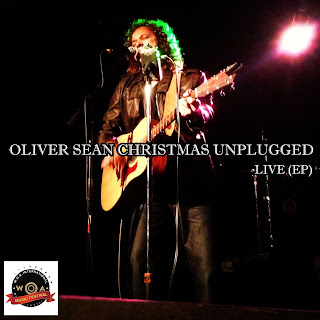 'Christmas Unplugged' the Brand New EP by MTV Europe Music Awards Nominee Oliver Sean is scheduled for release on 23rd November 2012.
The EP features Oliver Sean singing a Live & Unplugged set of his favorite christmas classics by Elvis Presley, Eagles, Shakin' Stevens and Jose Feliciano
The EP/Digital Album is scheduled for release this Friday at 10:30AM GMT (4:00PM IST / 6:AM EST) and will be offered as a free download to the first 10 fans who log in to the Official Oliver Sean Website at http://www.oliversean.com following which the EP will be available for download at a special discounted price for a limited time.
www.OliverSean.com
Posted by Oliver Sean at Wednesday, November 21, 2012 No comments:

To you my fans. This EP 'CHRISTMAS UNPLUGGED' has been long overdue. So here it is and I hope you enjoy my favorite christmas songs done in my style. Love Always - Oliver Sean

Posted by Oliver Sean at Wednesday, November 21, 2012 No comments: 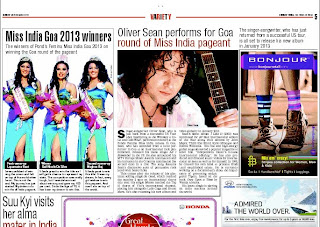 The singer-songwriter, who has just returned from a successful US tour, is all set to release his new album in January 2013

Singer-songwriter Oliver Sean, who is just back from a successful US Tour after headlining at the Whiskey a Go-Go and Café Wha?, performed recently at the Ponds Femina Miss India contest in Goa. Sean, who has ascended from a local performer in Goa to an international rock phenomenon, released his latest single All I Remember in the US. He also announced his MTV Europe Music Awards nomination and his inclusion in the Grammy nomination list second time in a row. The song features Sean's distinctive style of percussive rock laced with heavy licks.      This comes after the release of his platinum selling single So Good, which reached the number 2 spot on international charts this year. His single Movies reached the Top 10 charts of Vh1's international channel, placing him alongside Lady Gaga and Bruno Mars. He's also releasing his new album andvideo globally in January 2013.      Sean's debut album I Like It (2003) was nominated for AV Max International Album of the Year along with albums by John Mayer, Third Eye Blind, Kylie Minogue and Robbie Williams. His rise and high-energy global stage shows led a popular magazine to label him "independent music's hottest international offering". He has also produced and directed music videos for international artistes as well as for himself. In 1998, he created his own label to promote fresh |and established talent. He is currently working on a documentary about the importance of protecting endangered Tigers, based on the book Once Upon a Time by Wanda Alvares.      His latest single is playing on radio stations around the world.

TRAILER: Episode 3 of 'The WOA TV Show - All Things Music!'

This is a TV Show that features the best of Independent music videos from around the world.

The show is conceptualized and produced by MTV EMA 2012 Nominated Artist and Founder of W.O.A International - The Music Co., Oliver Seanhttp://www.oliversean.com

Tune in on 14th Nov and every wednesday to catch a new episode of The WOA TV Show - All Things Music (SEASON 1).

To submit your music video for the show please submit officially at http://www.woarecords.com/submissions - unsolicited submissions don't get watched, so please go to the site and send it in officially.

The WOA TV Show - All Things Music is an Oliver Sean Production for W.O.A Films - A W.O.A International - The music Co. Property.
www.woarecords.com

Posted by Oliver Sean at Tuesday, November 13, 2012 No comments:

The 2nd episode of the brand new series 'The WOA TV Show - All Things music' will air this wednesday, the 7th of November 2012 RIGHT HERE!

Check out the show that showcases exceptional Independent music videos and artists from around the world.

The WOA TV Show - All Things Music! is an Oliver Sean Production for W.O.A Films http://www.woafilms.com