The official public notice to 4 artists under contractual obligations to W.O.A Records 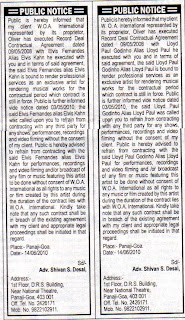 Here are the public legal notices as printed on the national newspaper in India about the 4 artists in India namely LLOYD PAUL, ELVIS KAHN, LAVINA SOARES and MARIA MARSCH who have breached their contracts and cheated W.O.A International and its founders and are now absconding and who owe huge amounts of monies to W.O.A International.

Third parties are hereby notified not to contract these people for any performances, recordings, broadcast or anything to do in the entertainment industry without an official N.O.C received by W.O.A International directly allowing them to perform etc.

W.O.A International will move to legal proceedings against any party contracting with any of these artists as it goes against their legal contracts with W.O.A International
Please read the Official Legal Public Notices attached herewith.
- W.O.A News Desk
--
http://www.woainternational.com - The Music Company!

Neil C Young's hot new album 'Where's Yours' out now in India on W.O.A Records. Pick up a copy at all A Class and Fine CD Stores of one of W.O.A Records' favorite artists who has been a regular feature on W.O.A Radio Playlists across this region all through 2009 - W.O.A News Desk
Posted by Oliver Sean at Tuesday, July 27, 2010 No comments: 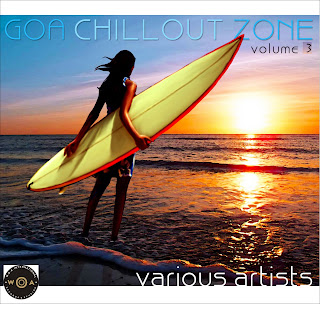 The highly anticipated Goa Chillout Zone Vol. 3 has been launched on the 27th of July 2010.
The album consists of 19 of the world's finest Independent Artists. Pick up a copy of the album at your nearest CD Store or on iTunes next week.
- W.O.A News Desk
http://www.woarecords.com
W.O.A International - The Music Company!
Posted by Oliver Sean at Tuesday, July 27, 2010 No comments:

Goa, India –July 27th, 2010 – W.O.A International proudly announces the launch of their third volume in the Goa Chillout Zone CD collection. Comprising of 20 International artists from various genres from both the company's record label W.O.A Records as well as unsigned acts, it's an eclectic double CD bringing together some of the very best artists in independent music today. Importantly, it's part of an extremely worthwhile cause at the same time.

"The Goa Chillout Zone has proved to be a very successful compilation album for W.O.A Records and the artists on the first two compilations, with these albums we're not only bringing original and exciting music to the public," says Wanda Alvares, Executive Vice President / Head of Marketing, "we're also giving back to a cause we believe passionately in. For every CD sold, we utilise 10% of the company's share towards animal welfare"

The situation of stray animals and their welfare is in dire straits in many regions of the world, it's a situation that's continuously in the news and the animal cruelty by many government officials handling the stray animals is alarming. W.O.A International recognizes that it's something that won't be changed overnight, but passionately believe that continued support in the fight against it will eventually win through.

The Goa Chillout Zone CD Vol. 3 is the third release in the planned five-volume collection, with the first two volumes breaking many records and topping several album charts. Bringing together the best that W.O.A International has to offer as well as unsigned independent artists worldwide, it includes the likes of Ross Royce, Freddie Long Band, Aquarius Blue, Martin Williams, as well as acts Peter Bayreuther, Yaz Alexander, Lawrence Cresswell and other Independent Music stars.

Such has the success been in the first two volumes of the Goa Chillout Zone that W.O.A International is already planning the fourth volume, due for release in August 2011. Artists interested in appearing on Vol.4 are encouraged to submit their songs for submission onto the collection. With 10,000 copies being pressed and distributed worldwide to mega stores, retailers, radio stations, coffee shops and digitally to Amazon and iTunes etc as well as top clubs at holiday destinations like Ibiza, Goa, etc, it's an excellent opportunity for unsigned artists to be heard by large audiences. Each artist selected for the CD will receive royalties/licensing fees.

With the Goa Chillout Zone CD Vol.3 set to be a huge success following in the footsteps of the first 2 volumes for both artists and the chosen charity, and Vol.4 already in the planning stage, 2010 looks set to be a milestone year for W.O.A International. Buy the CD today and find out what all the noise is about

Formed in 1998 by World Music star Oliver Sean, W.O.A International is a global entertainment company that continues to lead the way when it comes to how music should be promoted. They are pioneering independent international music in India and Middle East and are now synonymous with the region. Their enviable reputation at opening up new possibilities means that they are the go-to company for independent artists wishing a truly international presence.

With the fantastic Oliver Sean 'So Good' Dubai Tour kicking off today, fans of the Star in Dubai are in for a mighty treat.

1st July: 'So Good' Tour update on The Express

- W.O.A News Desk
Sent from my BlackBerry® smartphone from du
Posted by Oliver Sean at Thursday, July 01, 2010 No comments: