Event Faqs Magazine, December '08 -Redefining the words 'chilled out', Oliver Sean, at his simplest, is a man with a dream. Ten years ago, Sean began to make this dream a reality with a small studio in Dubai. Today, he is the president and founder of W.O.A International – a global entertainment company that houses W.O.A Records, W.O.A Studios, W.O.A Management, W.O.A Events and very soon 'The Independent Musician - Magazine' (W.O.A Publications). The W.OA Records India Tour 2008 saw nine international independent artists and an audience of 3,000 people at their show in Goa on June 29, 2008. They also performed in Pune and at Hard Rock Café and nightclub Privee in Mumbai. Sean spoke with EVENTFAQS' Vanessa Rebello, about the W.O.A Records India tour 2008, the music scene in India and how it compares with the rest of the world.

This is the first W.O.A Tour in India. What has the response been like?

Since the scene for independent artists has not yet reached India, people are not too sure about what to expect. We saw a large crowd in Goa, and even Mumbai seems to be treating us well. Sponsors are skeptical, but the media has been omnipresent and encouraging.

How big a component are live events for record labels such as W.O.A?

India has no concept of tours and live events when it comes to the music industry. Here, before an album is launched, there is a flashy music video released and that's about it. But abroad, touring is a very important element of music. It's essential for a band or an artist to get around and be known among the people. And the best way to do this is through live events. Videos are secondary.

How big are the divisions of WO.A International?

I have a few main people who take charge of important things, and they have people under them who help them out. Right now, there are about 10 to 15 people in each section of W.O.A International. We are looking to expand sometimes soon.

Do all the divisions of W.O.A International cater solely to W.O.A artists?

As of now, that is the case. W.O.A International functions in a circular manner. The artists are managed by W.O.A Management, they record at W.O.A Studios, their music is on W.O.A Records and their events are handled by W.O.A Events.

How many events have you done in India?

We've done a few events in India before – mostly in Goa. But we've never had anything on such a large scale. This is the first time we have taken so many independent artists to tour India.

In your opinion, how is the music scene changing?

It hasn't changed too much when it comes to independent artists. It is still very hard for them to find a place in the music industry. Today, people will listen to a Beyonce, only if a major music label like Sony tells them to listen to it. With this tour in India, we aim to change that. We want people to know that there is a lot of good music out there, and just because it is not backed by a major music label, doesn't make it any less than any other kind of music.

How different is the Indian market from other markets?

Even English music hasn't set in as much as it should have in India, leave alone Independent artists. Abroad, people like to explore new kinds of music. They enjoy going for live events and they love being the first people to know about a good band. The culture of independent artists has set in there. Also, getting sponsors is a huge problem here in India. Abroad, there are a lot of people with money who are simply looking for new talent to support. But in India, unless you are big, getting sponsors is next to impossible.

Is there such a thing as maturity of a market when it comes to music consumption and live events?

Definitely. But maturity only comes into play once there is exposure. And as of now the key focus is on exposure, so that people are aware of independent artists and live music events. Once people are exposed to these forms of music consumption, maturity can be easily reached.

With the online space offering popular forums for music, has the value of live events gone down?

Online space usually affects live events positively. If you're being heard and downloaded online, chances are that people are going to want to watch you live. However, from a producer's point of view, I obviously want my artists' music video to be sold and not downloaded.

What can people expect to see from W.O.A soon?

Most importantly, our artists' albums will be locally available in Mumbai by May 10, 2008. They will now also hear from other independent artists like Fumble from Finland, Daze of Dawn from Sweden and Jack Dalton from Australia, who plays with AC/DC's' guitarist. I'm working on a song in a movie called 'Cutting Chai Dreams High'.

ABOUT W.O.A INTERNATIONAL  Formed in 1998 by World Music star Oliver Sean, W.O.A International is a global entertainment company that continues to lead the way when it comes to how music should be promoted. They are pioneering international music in India and Asia and are now synonymous with the region. Their enviable reputation at opening up new possibilities means that they are the go-to company for independent artists wishing a truly international presence.

Posted by Oliver Sean at Saturday, December 20, 2008 No comments:

One of India's biggest Rockstars Goan local lad Oliver Sean is getting ready to be the pin-up boy of music with the release of his new album Getting Around. He also runs his own recording label company that handles musicians worldwide. He strums a guitar for Hi!

Hi! Blitz Magazine, 18 December 2008 - He's got the gall, the gumption and he has a combination of Italian and Goan Portuguese looks. Add that to his music and here's a charmer from the land of the sea and the sun.

Of Goan Portuguese (mother) Italian (father Sicilian) lineage, Oliver Sean singer/songwriter/producer began his musical career in 2003 with his self-produced debut English album I Like It (W.O.A Records/Times Music) that speaks about love and happiness. Apart from singing, Oliver also plays the keyboard and guitar. His eclectic music with a Latin influence is referred to as an alternative acoustic rock and world rock in the international music scene. His first album fuses mainstream rock with classical Indian instruments and Latin rhythms. Talking about his musical leanings, Oliver gives credit to his late uncle Victor Alvares, the acclaimed Goan bass guitarist who introduced him to various facets of music.

Two ventures coming up for the enterprising entrepreneur: music launch for the crossover film Cutting Chai being directed by Flavin Lucien, an Anglo Indian, and his own album Getting Around, which should be released by early February 2009. "My English albums are not written commercially. I put in songs written over months and years because it is almost like a book of experiences," he reiterates. He lists some of his favorite tracks from the CD: I've Been Waiting, Movies, Come On Move On and the title track Getting Around, Somebody, Alone, which is dedicated to his mom and all the single mothers. Oliver's repertoire between his English albums boasts of commercial releases – a Hindi album, Christmas singles, background scores and more.

Oliver Sean dreams big and works harder. When his first album I Like It was released, he found little help coming forth from recording companies. It was his gumption to take on the task of releasing his album himself, which led to the creation of W.O.A International in Goa. "It's to help the many talented musicians around the world who have no avenue or clue of how to go about releasing their music," says Oliver.

W.O.A International is a global entertainment company that houses W.O.A Records, W.O.A Studios and W.O.A Management, which has a background in conceptualizing and organizing world-class live concerts and festivals. A marketing division has now been incorporated as a separate entity, and the W.O.A Music marketing service has been made available to all independent musicians, labels and management companies across the world. Those who want to avail of these services to promote their music and artistes in these regions, without having to tie up with a management company or record label from this region now can do so, thus retaining complete control of their music, live performances, entertainment, revenues, etc.

With over a hundred artists already signed by W.O.A, it has some of the world's biggest international acts as a part of their roster, including Oliver Sean, the founder of W.O.A , Grammy-nominated rockers Tiger Tiger, Russia's biggest metal band ANJ, Finland's Rockstars Fumble, Ireland's no 1 Gypsy Jazz Band Blue Jar and various other independent and major label artistes.

Growing up in the land of the sea and sand, Oliver talks fondly of Loutolim, the place where he grew up. This breathtakingly beautiful and landscaped land is his inspiration; also a search for true love and gratitude for his family. Lost in his dream world he notes, "I spend a lot of time alone, watching a sunset on the beach or driving on an open highway in Goa, because I can be in my own world and this is what brings my music to life. I get most inspired when I'm with my dogs Buddy and Sam, a Labrador and a German Shepherd." Most of all he finds comfort in his single mother Wanda Alvares' love.

Handsome, young and eligible, Oliver's search for his lady love is going on. "I love beautiful women and this makes it hard to decide. Seriously though, I think when the right person comes along I'll know."

Posted by Oliver Sean at Thursday, December 18, 2008 No comments: 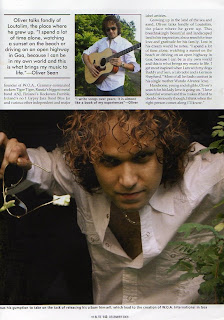 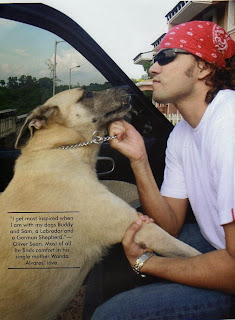 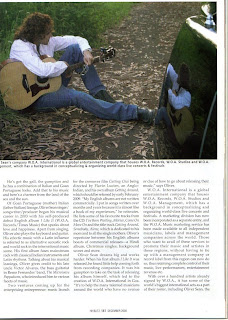 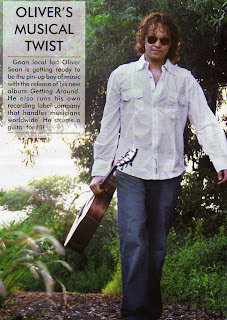