Today I finally sat down and remixed the title track of my new album 'Darna Chod Do'. This is the album scheduled for release this month and I must say that the remix is sounding great - even had comments from from my co producers that the video should be done for the remix instead :-) (These guys really know how to flatter me)

Good news I got is that my label wants to shoot extra footage of the main video and make a video for the remix - how cool is that?!!!

Well besides working on the remix and getting it "almost" ready I also went and sold off my E61 today :-( it was heart breaking but I had to - I have the Nokia N93 now and my trusty old Nokia 6255 CDMA - I just didnt see the point in keeping the E61 safely tucked away in my closet ;-)

Oh by the way Im gonna put the remix up on my site so you all can download it and leave me a few comments on what you think of the song. http://www.oliversean.com 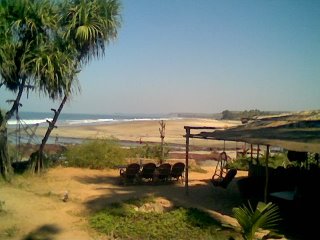 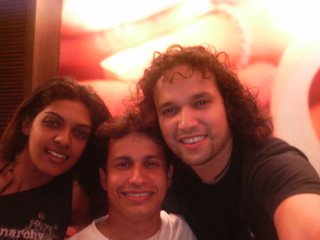 Im so addicted to Tv that its starting to piss me off! Im gonna try and disconnect my Cable and just switch off the Tv for a couple of days.... Nah, I just couldnt survive! :-) I am so used to it - its like going to the loo - you just cant stop it ;-)

Here is a pic we clicked with my N93 of me and my friends chilling out at Cafe Coffee Day today in Miramar Panjim Goa (My hometown) and also a favourite pic of mine of Ashvem Beach in Goa, I clicked this with my Treo 650 the first day I got it (makes me cry just to think of the treo being stolen) :-((. Anyways hope you like the pic its just beautiful. 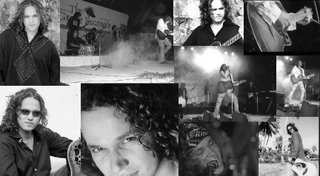 Here is a new design made by my publicist in the US - Basically a collage of my Pictures. I just think it looks real cool in Black and White and thought I should put it up here.
(Great job Heidi - your designing skills have improved since 8 years ago ;-) I love this Picture collage.)

By the way, this is used as the template on my page on 'MySpace' http://www.myspace.com/oliversean and seems to be a hit with all the people who write in to me there and who I definitely consider my friends rather than Fans.

I've been spending a lot of time on the computer now that my Nokia E61 is packed up and my N93 is in my hands most of the time - the N93 is a great phone but the E61 was definitely like a laptop and I hardly used my comp for any of my web work but the N93 isnt that user friendly for editing work - well you have to make compromises for style I suppose ;-) Good thing is Im gonna have loads of pictures now for all my friends to see now - will try and keep the pics interesting...

Oh, I downloaded a cool little software from the net just a while ago - Its a timer for the comp to shut down at a particular time - so for all of you guys out there who have free internet in the nights - keep it on all night and use this software to shut it down just before 6AM (usually the time when the billing kicks in again) and you can sleep soundly till 11AM ;-)) and get your downloads done without wakin up in a cold sweat at 4 AM saying "Shit is it 6AM?" hahaha. Anyways the software is called "StayOn" found it on google - real cool I think.

My fanatism with phones and how it became an obsession ;-)

First I was a normal gadget freak - would buy a good phone (well I always had about 2 phones as far back as I can remember but mostly cause I used CDMA and GSM) and then I got the Treo 650 and my life changed...

All of a sudden I didnt need the Computer so much and I didnt have to take my laptop everytime I travelled (My guitar as hand luggage was too much as it is), so there I was flaunting my new treo 650 (not too many used in India I should say) so all my friends were impressed and their nokias didnt come close ;-) I thought I didnt need any other phone for atleast 2 years or untill the Treo 700p came out ;-)

But then a terrible day came when my Treo 650 got STOLEN!!!!!! It was at a concert of mine in Bangalore - can you believe it? My concert! while I was on stage! a "FAN" comes close to the Mixing board which was unmaned for a few minutes and where my Treo was lying right on top of the Mixer :-( and my baby was taken away....

But anyways I had a few single malts and tried to drown my sorrows in some of the finest single malt scotch in the world... But I culdnt take this disconnected feeling - its unelievable how you get so used to being connected to your emails and the net with a phone like that (I know how the blackberry users feel now). So as soon as I reached Goa (My Home Town) the next morning, I went straight to the phone shop from the airport and started looking for phones - sadly the Treo 650 is not easily available in India so I couldnt get it again :-( but then I saw the E61 and my world changed.... WIFI on a business phone, that critics say is better than the treo and blackberry WOW!!! But damn, no touch screen! But I threw caution to the wind and got the E61 even though it didnt have touch screen nor a camera....

And I was HAPPY! it was great until yesterday I saw the Nokia N93 (have been seeing the ads for a while now) but I actually held it in my hands yesterday, saw the features and thought Id died and gone to heaven ;-)

Well so I went and got it - yep - its expensive but after the treo 650 got stolen anyone would think Id just get a simple phone and say ahhh Ill just stick to my laptop but I dunno, its getting worse - Now I have 2 huge phones, both with unbelieveable features and now im confused - do i keep the E61 or the N93? The E61 has awesome business features plus the qwerty keyboard and the N93 is THE BEST MULTIMEDIA PHONE - do I keep both? :") r should I start checkin for business software for the N93 so I can keep the multimedia phone and do my business functions on it too? All u gadget freaks out there - Tell me what you think I shhould do?

Oh did I mention that the N93 audio quality is unbelievable? ;-)

Anyways, enough of my ramblings, Im gonna start posting all the cool pics Im gonna be snappin up with my N93.