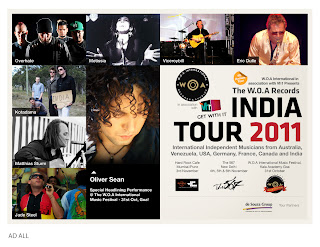 With just 1 month to go for the much awaited W.O.A Records India Tour &
International Music Festival things are moving along at a rapid pace and the
fans are in for one hell of a treat this year!

Check out the latest promo of the W.O.A Records India Tour for 2011. This
year it gets so much more fun as we have Vh1 as our associate partner and
some wonderful venues and tour partners like The Hard Rock café, The 567,
Desouza Group, Furtados and the Government of Goa all supporting W.O.A
International in promoting the biggest Independent Artist Tour of India,
better known as THE ANNUAL W.O.A RECORDS INDIA TOUR.

Adding to the excitement - this year Platinum selling singer songwriter
Oliver Sean & his Band will make a special appearance at the W.O.A
International Music Festival in Goa to headline the festival on the 31st of
October 2011 and officially kick off the 4th Annual W.O.A Records India Tour
2011.

If you haven't received an invite to the Goa show yet, you better make some
calls because we hear that the festival is 'invitation only' and you need to
be a really big music fan to receive an invite to the musical show of the
year. Oh and just to be clear - THERE ARE NO DJ's performing at this show
;-)