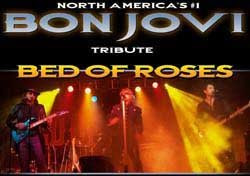 "W.O.A management, a part of the W.O.A International group, signs on Bed Of Roses, the world’s best Bon Jovi tribute band to a three-year management and marketing deal for India and the Middle East"

Goa, India – August 23, 2008 – W.O.A International, through its management division W.O.A Management, signs on Bed of Roses, the planet’s No.1 Bon Jovi tribute band to a three-year management and marketing deal. This partnership will see W.O.A Management represent the band across India and the Middle East.

“This is the first tribute band that W.O.A International has signed on and the reason for this is the fact that Bed of Roses is truly exceptional and we see immense potential for an act like this in India and Dubai” says Pete Saunders, V.P. Artiste Management, “they have a strong following across North America and are now all set to bring their magic to this side of the world.”

In the summer of 2004 Bed Of Roses was conceptualized by front man Darryl Clayton. “Being a Bon Jovi fan since the bands inception in 1984, plus the fact that I’ve been told most of my life how much I resemble Jon Bon Jovi in voice and physical appearance, it was a venture we found easy to undertake” says the singer. The band launched March 24th, 2005 with a sold out, self produced show in their hometown of Winnipeg, Manitoba, Canada. Since then, they have performed across North America & across International venues multiple times.

The deal with W.O.A Management will see the band touring India and the Middle East over the next two years. With the excellent and one of a kind support system for artists that W.O.A International has, that consists of W.O.A Events, W.O.A Artiste Management, W.O.A Records, W.O.A Studios, W.O.A Radio and W.O.A Music marketing, Bed Of Roses is only going to reiterate their stand as the Planet’s No.1 Bon Jovi tribute band.

Bed Of Roses is also going to be featured on the new W.O.A Radio syndicated show and will be seen on various TV shows in India in the coming months. The fans in India and Dubai are going to be surprised and awed by this wonderful band during the 2009 Bed Of Roses Tour!