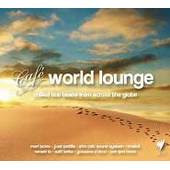 Luna Blanca's song 'Rising Sun' is now featured alongside artists like Nelly Furtado, Nenneh Cherry and Youssou N'dour, who are all featured on the compilation CD World Cafe Lounge.

Luna Blanca's Rising Sun single is also one of the featured songs on the world famous compilation Goa Chillout Zone Volume 1 (W.O.A Records) and has also been on the No. 1 spot on various radio charts across the world.

"This venture with Universal Music Australia is part our plan to grow larger and increase our network to support Independent artists so that great musicians like Luna Blanca can be featured alongside major artists like Nelly Furtado"  says W.O.A International Founder and President, Oliver Sean. "Through the years we have created partnerships with various other major labels, TV Networks, Radio Stations, Distributors and Companies that join forces with us thus helping us support our artists. These partnerships are growing every year and is great news for all our artists"

W.O.A Records recently released 3 International albums in Goa which are being supported by Vh1, Zee Cafe, Big FM and others and W.O.A Records is expected to release the highly anticipated albums Goa Chillout Zone Volume 2 and Independent No.1's Volume 1 this April. These albums will feature some of W.O.A Records finest artists from its Management and Record Label roster.