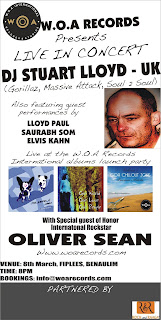 W.O.A International through its record label to organize a gala event in Goa
to launch their new International albums with a live concert by
International DJ Stuart Lloyd and guest performances by various W.O.A
artists.

Panaji, Goa ­ March 5th 2009 ­ The International record label W.O.A Records
based out of Goa and having its branches in Dubai, UK and The US is all set
to release three of its latest International albums which have hit the
itunes US charts. These CDs are being released all across India and are
currently top selling albums Internationally via the W.O.A International
Distribution network. To celebrate the launch of these albums the event is
to see a Live concert by International DJ Stuart Lloyd along with two of
W.O.A India artists Lloyd Paul and Saurabh Som.

³All of us at W.O.A are very excited about this upcoming concert and album
launch as it is expected to be the first of its kind in this region², says
Wanda Alvares, Marketing Director W.O.A International ³W.O.A has pioneered
Independent music promotions in India and with the launch of these albums
and fantastic artists we reiterate our support and complete backing to good
Independent music².

The albums to be released are Goa Chillout Zone Volume 1 featuring 26
International artists from the W.O.A Records roster coming together on this
compilation CD to promote peace and love with 10% of the sales revenue going
to animal welfare and stopping the fur trade. Also being launched is the
UNESCO backed album ŒOne World One Love One People¹ by W.O.A UK artist
Alison Woods whose video ŒJust think of good things¹ has recently started
airing on Vh1, Zee Café and various other music channels. The final launch
is of the album ŒLos Perros - Puta Madre¹ by British DJ/Singer/Producer
Stuart Lloyd who has flown down especially for this event and will be the
headlining act for the launch party.

The launch will be held on the 8th of March at Fiplees in Benaulim where
everyone in Goa can experience W.O.A Records¹ latest concert & launch which
is set to be a gala evening with great international music, celebrities and
much fanfare.

Formed in 1998 by World Music star Oliver Sean, W.O.A International is a
global entertainment company that continues to lead the way when it comes to
how music should be promoted. They are pioneering International music in
India and Asia and are now synonymous with the region. Their enviable
reputation at opening up new possibilities means that they are the go-to
company for independent artists wishing a truly international presence.

Further details about W.O.A International is available at www.woarecords.com
Posted by Oliver Sean at Thursday, March 05, 2009