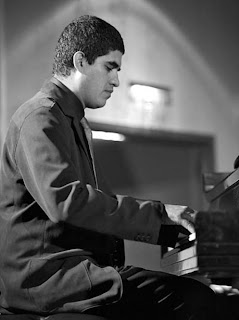 Goa, India – Oct 19, 2009 – Jazz is fast becoming one of India's most requested genre's when it comes to International music in India and some of the finest International Jazz artists are introduced to fans in India by W.O.A Records. W.O.A International - The Music Company has added to its list of top selling artists by signing on Mexican Jazz artist Diego Ramirez to its roster.

"Jazz is a top selling genre in India when it comes to International music and we are proud to say that we have some of the best Jazz musicians from around the world signed to us" says Wanda Alvares, Executive Vice President and Marketing Director, W.O.A International. "With the signing of Diego we have added to the list of Jazz stars we have on the roster now and this is good news for Jazz fans across the region".

Diego Ramirez is an extraordinary jazz pianist and composer, with pianist brilliance and staggering creative energy.  His CD 'El Ultimo Chilam Balam' was named best jazz album of 2008 by L.A music awards.  Diego Ramirez is continuing his winning streak with his song 'Andrea' which earned Jazz Runner up in Simon Cowell's (American idol Judge) UK Song writing Competition. Also worth mentioning is his song Ka'Kau' which received a Honourable Mention at Billboard's Song writing Competition. From Latin America, the United States, to Japan and now India, people have been captivated and enchanted by Diego Ramirez's music, which is best described as universal.

"When I was twenty I had my first exposure to jazz and decided to become a jazz pianist and composer and within a year the Diego Ramirez Trio was set up in Cancun" says the front man of the Diego Ramirez Trio, "my music and compositions are influenced by my admiration for Mexican classical composers Silvestre Revueltas, Manuel M. Ponce, and Carlos Chavez and also by improvisational musicians such as Miles Davis, but it was Mayan music which gave birth to my original compositions"

W.O.A Records has confirmed that Diego's new track is to be on the upcoming India Tour 2009 Compilation CD, which will be promoted via its vast music industry networks this year. Stay tuned to the official W.O.A website for further updates on this artist