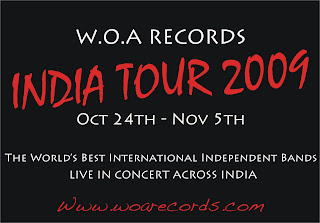 World's Best Independent Artists take over the Indian Music Scene for a week during the W.O.A International annual tour and music festival across the country.

The artists this year include respected worldwide acts like British Metal sensation Cypher16, Australian Alt Rockers Risemann, Hip Hop Star Legrand from the US, Guitar Virtuoso Danny John, Kallii the Greek/Australian rock sensation and Headlining the special concert exclusively in Goa will be International Rocker, Goa's very own Oliver Sean, who will be joined by four additional top International artists from around the world including touring acts like Monica and the Explosion from Sweden amongst others. All the artists will perform everything from pop and Acoustic to Rock and Hip Hop, so there's something for everyone's taste.

The five headlining artists of the India Tour will also travel to Bangalore to perform at a two day fest at Bangalore's best live performance venue Kyra on the 1st and 2nd of November and the tour is to end with special 3 hour concerts at Mumbai and Pune at the Jazz by the bay live music clubs simultaneously over two days on the 6th and 7th of November.

W.O.A International will also be producing a compilation audio CD comprising every artist on the tour and other top International acts that will be released worldwide, and the much talked about Rockumentary. The Rockumentary will be a behind-the-scenes video of the entire tour including exclusive clips of the live performances at the venues. This will be aired on major global networks in parts and will also be available as downloads on the itunes store, so audiences around the world can view the performances of these artists during the tour making it a truly global experience. The tour is expected to garner immense support and interest, as it will show International artists from various countries touring India together and performing at world-class events – a true International Independent music revolution in India.

The national media support garnered, including featuring the artistes' music videos on major music channels, major publications supporting our endeavour to support Independent musicians, the documentary of this event being featured globally and the support from India's best-known venues, is testament to the magnitude of the tour.

With an even bigger, better and louder tour planned for 2010 when the tour will be held in India and Dubai, the W.O.A Records India Tour is now an annual event that fans of International Independent music can look forward to every year. Make sure you don't miss out on this world-class music event.