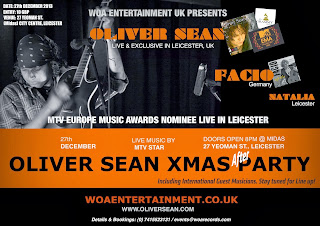 The party that promises to be the BOMB!!!
International Music Star Oliver Sean will be performing LIVE & EXCLUSIVE in Leicester this December at the Oliver Sean Xmas After Party - the first in a series of monthly live concerts planned by Oliver Sean and W.O.A Entertainment UK across Leicester, the UK and Globally - http://www.oliverseanparties.co.uk

Oliver Sean has recently returned to Europe after his month long tour across India and the Middle East where he headlined the 6th Annual Multi Artist W.O.A India Tour & Goa/Dubai International Music Festival.
With the singer's brand new music video for his new hit single '(are we) Doing That' expected to premiere on Vh1 International and Vh1 India in the next few weeks, the 27th gig in Leicester UK will end 2013 with a bang for the MTV Europe Music Awards 2012 Nominee. Oliver Sean has been performing across New York, Toronto, London, India and Dubai all through the year on his 2013 globe trotting DOING THAT tour. www.oliversean.com

Also joining the MTV Europe Music Awards Nominee on stage at 27th Dec will be International German Artist Facio (www.faciomusic.com) featuring Pulpo, the duo have just returned from their Swiss tour recently and released their brand new EP in London last week - fans will get to listen to some of their new foot tapping material from their EP 'Ma Vie' at the 'Oliver Sean Xmas After Party'. Adding a local flavor to the Oliver Sean Xmas After Party will be local Leicester singer Natalia Lowe.
For more information and up to the minute Band additions and other updates, please visit the Facebook Event Page for the Oliver Sean Xmas After Party https://www.facebook.com/events/707446322607313/
To book a ticket please email events@woarecords.com
More information on all Oliver Sean Parties can be found on the official Oliver Sean Parties Website http://www.oliverseanparties.com
For more information on MTV Europe Music Awards Nominee & 3 time Grammy Nomination Ballot Selected Artist Oliver Sean - please go to http://www.oliversean.com
- The W.O.A Entertainment Group
www.woaentertainment.co.uk
Posted by Oliver Sean at Wednesday, December 04, 2013