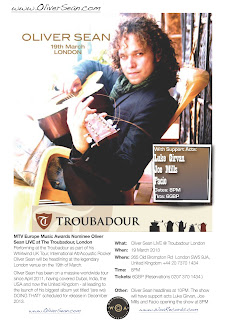 Performing at the Troubadour as part of his Whirlwind UK Tour, International Alt/Acoustic Rocker Oliver Sean will be headlining at the legendary London venue on the 19th of March.

Oliver Sean has been on a massive worldwide tour since April 2011, having covered Dubai, India, the USA and now the United Kingdom - all leading to the launch of his biggest album yet titled '(are we) DOING THAT!' scheduled for release in December 2013.

Other: Oliver Sean headlines at 10PM. The show will have support acts Luke Girvan, Joe Mills and Facio opening the show at 8PM