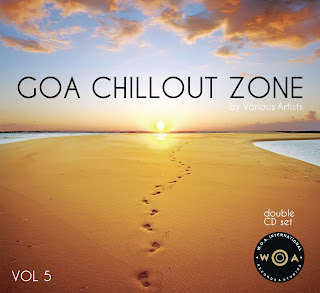 Featuring 27 artists from around the world, the Goa Chillout Zone Vol.5 marks the 5th Anniversary of the W.O.A International compilation that has consistently discovered and introduced great indie chillout artists to a global fanbase
FOR IMMEDIATE RELEASE
Goa/London/New York - 2nd Sept, 2013 - W.O.A International announces the launch of the highly anticipated Goa Chillout Zone Vol.5. This is the 5th Anniversary edition of the annual Goa Chillout Zone compilation album. Volume 5 features 27 of the worlds finest chill music/easy listening  artists from around the world all coming together on an album that has now come to be called the 'Best Annual Indie Chill Album' produced and conceptualised by MTV Europe Music Awards Nominee, Internationally Acclaimed Musician and Founder of W.O.A International - Oliver Sean.

"We have been releasing the Goa Chillout Zone every year and its been a pleasure discovering such wonderful artists, some of whom have now gone on to achieve tremedous success in their musical careers" says Oliver Sean, founder of W.O.A Imternational and Producer of the Goa Chillout Zone, "when we conceptualised this album back in 2008 we never intended this to be an annual compilation, today as we celebrate the 5th anniversary edition of this compilation album it is a sense of immense pride for my entire team at W.O.A International - The Music Company"

Fans will also get a chance to listen in to special artist interviews and interactive radio shows with some of the featured acts of this compilation including Safffra, Laura Ainsworth, Diana May Clark, Linda Wood, Daiyon, HotHouse Gruv and Akiko/Firebird999.

Formed in 1998 by MTV Europe Music Awards Nominee and Platinum Selling International Music Star Oliver Sean, W.O.A International is a global entertainment company that continues to lead the way when it comes to how music should be promoted. They are pioneering international music in India and Asia and are now synonymous with the region. Their enviable reputation at opening up new possibilities means that they are the go-to company for independent artists wishing a truly international presence.