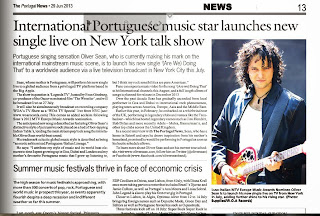 Portuguese singing sensation Oliver Sean, who is currently making his mark on the international mainstream music scene, is to launch his new single '(Are We) Doing That' to a worldwide audience via a live television broadcast in New York City this July.

Sean, whose mother is Portuguese, will perform his new single live to a global audience from a privileged TV platform based in the Big Apple.
The show in question is 'Legends TV', hosted by Evan Ginzburg, co-producer of the Oscar-nominated film 'The Wrestler', and will be broadcast live on 27 July.
It will also be simultaneously broadcast on recording company WOA's TV Show as a 'WOA TV Special' live from NYC (see: www.woarecords.com) This comes as added acclaim following Sean's 2012 MTV Europe Music Awards nomination.
The anticipated new song is described as featuring Oliver Sean's distinctive style of percussive rock placed on a bed of foot-tapping Indian Tabla's, lending the main stream pop/rock song the inimitable Oliver Sean world-beat sound.
His trademark eclectic global music style is described as being "as exotic as his mixed Portuguese / Italian Lineage."
He says: "I attribute my style of music and its world beat elements to time I spent growing up in Goa, Dubai and London and my mother's favourite Portuguese music that I grew up listening to, but I think my rock sensibilities are pure American."
Fans can expect a music video for the song '(Are we) Doing That' to hit International channels this August, and a full length album of songs is planned for release in December 2013
Over the past decade Sean has gradually ascended from local performer in Goa and Dubai to international rock phenomenon, playing tours across America, Europe, Asia and the Middle East.
Earlier this year, in February, he embarked on a whirlwind tour of the UK, performing in legendary clubs and venues like the Troubadour – which has hosted legendary names such as Jimi Hendrix, Bob Dylan and more recently Adele – Moles, Bannerman's, and other top clubs across the United Kingdom.
In a recent interview with The Portugal News, Sean, who has a home in Estoril and says he draws inspiration from his mother's homeland, promised he would be performing in Portugal as soon as his hectic schedule allows.
To learn more about Oliver Sean and see his current tour schedule, visit www.oliversean.com, follow him on Twitter (@oliversean) or Facebook (www.facebook.com/oliverseanband).