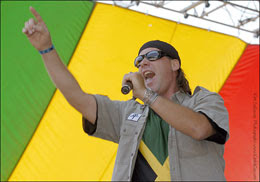 Jade Steel's Love Song is the highly anticipated music video featuring the American singer in a hot and sexy music video shot during the Singer's tour of India.

W.O.A International (Press Release) – 31st July 2012 – American singer Jade Steel has dabbled in so many styles and genres of music that he is as comfortable performing Metal and Rock as he is when he does Pop and Reggae! And now this versatile singer introduces his new reggae single 'Love Song'  with a music video shot for the single during his tour of India, when he was one of the headlining performers on the Annual W.O.A Records India Tour last year. The music video releases worldwide on 31st of  July as a web preview on major sites, including Vh1India.com, youtube, WOAFilms.com and WOARecords.com. The TV edit of the music video 'Love Song' is scheduled for release on Vh1 India and various other major networks within the next few weeks.

The music video for 'Love Song' shows Jade Steel in his element across various parts of India and also features the singer with the people and sights of India and of course a Jade Steel video cannot be without beautiful models, making this quirky video a fun watch for Jade Steel fans around the world.

"FUN that's how I'd describe Jade's video in one word" says the Music Video Director & Founder of W.O.A International Oliver Sean, "filming this video was really a fun time for the entire production team because everyone was in a great mood, the song was really good and the hot models around us just made it all easier"

Jade Steel's new album 'Children of Humboldt' which has won much critical acclaim in the US is now available in India on W.O.A Records and will soon be available as a mobile phone caller tune download along with several other new W.O.A Records releases across India, the Middle East and various other regions.

W.O.A Films, is promoting this video along with the other 4 music videos of the India Tour artists, with major support from its television partners, venue partners and online.